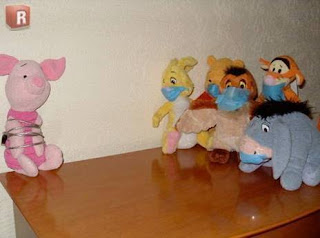 A crazy uncle. I’d bet nearly every family has one. A couple weeks ago I had an entertaining conversation with mine about his consipracy theories on the second gunman on the grassy knoll, the origins of propoganda and how a guy named Edward Bernays convinced North Americans to put bacon & eggs on their breakfast plates. I’ll touch on Edward Bernays more in future articles, but it suffice to say that my crazy uncle got me thinking about how the general public is educated. Which, brings me to H1N1.

I’m not sure if any of you are as confused as I am, so I figured I’d dig up what info I could about this Swine Flu to attempt to find out more factual information about it so that I’m able to avoid getting caught up in just the hysteria and hype.

· The H1N1 flu virus is a new strain of pandemic influenza which is different than the seasonal flu. People have no natural immunity to protect against this virus. The H1N1 flu virus emerged in April 2009 and surveillance of its spread shows that it is affecting more young and healthy people than the regular seasonal flu, which normally affects seniors and young children. People with underlying medical conditions and pregnant women may be at a greater risk for severe illness.
· More research is being done on how long a person can be infectious (be able to spread the virus to others), but it is believed that this period is for one day before the onset of symptoms and continues for approximately seven days after symptoms have started.
· If you get flu-like symptoms and are pregnant or have underlying health problems contact your healthcare provider.
· If you get flu-like symptoms and are otherwise healthy, you should stay home to recover.
· Canada has a National Antiviral Stockpile of 55 million doses of two antiviral drugs – Tamiflu and Relenza. Both are effective in treating H1N1 flu virus. This stockpile is enough for all Canadians who will need and want treatment.
http://en.wikipedia.org/wiki/2009_flu_pandemic

WHY THIS IS DIFFERENT