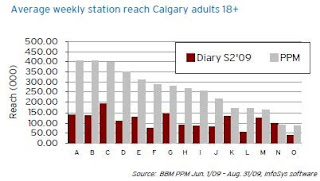 The PPM system signifies a major change in measuring radio (and TV). For decades, we’ve used a diary based system which asked panelists “what do you THINK you listen to”. We believe the new electronic PPM system is a far superior measuring tool because it more accurately measures “what people REALLY listen “. It’s important to note that the listening audience for each station in Calgary has not changed. What has changed is the way we measure each audience. One of my colleagues noted that this change is similar to when Canada converted from Imperial measurement to Metric. 10 degrees celcius is still as cold as 50 degrees farenheight.

The major changes are as follows

you may find yourself asking….
SO WHAT DOES THIS MEAN TO ME?

For the answer, I’d like to refer to the Wizzard of Ads, Roy Williams…http://www.entrepreneur.com/advertising/adcolumnistroyhwilliams/article170166.html

We want you to get to know us at Condotels, and we’re willing to lose a few bucks to make it happen.

Put yourself in our shoes. Nothing is more frustrating or more expensive than advertising that doesn’t work. So we did the math. Financially, it makes a lot more sense for us to help pay for your next golf outing than it does to pump out ads that don’t work.

Want to golf between now and December 7?

Here’s what we get out of it: Four people telling all their friends back home how much better it is to stay in a condo than in a hotel.

This whole thing sounds too good to be true, right?

Let us tell you what we’re up against: Four short years ago, Myrtle Beach had 73,000 rooms for rent. Today it has 92,000 rooms. Our job at Condotels is to rent out our clients’ condos when they’re not using them. And we’ve got a lot of condos to rent.

The Condotels check-in desk in open 24/7, just like a hotel, and we’re not hard to find. Just pick up your keys, and go to your condo. Do it once, and you’ll never stay in a hotel again.

Not interested in golf? Want to take the family to a luxury, oceanfront condo with a balcony overlooking the beach? Talk to us. We’re knee-deep in condos like that.

Condotels has decided to spend its ad budget serving you instead of annoying you.
Book a golf outing or beach vacation with us. Let us know it’s working.

by MarcBinkley in Roy Williams, the wizard of ads, Yellow Pages

PPM – a new way to measure TV and Radio

by MarcBinkley in how to buy radio advertising, negotiating, PPM, www.businesstown.com